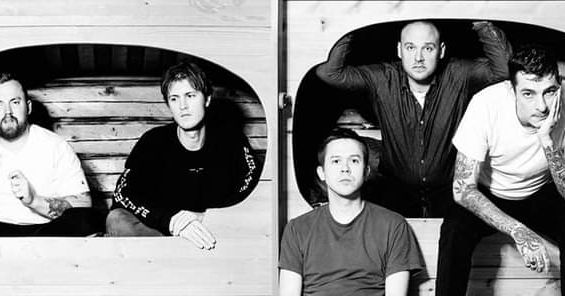 
Viagra Boys’ Sebastian Murphy dreams about everyone hating his guts. A lot. “I kept having this recurring nightmare where my mom was crying and my friends were all pissed off at me,” he recalls, almost reverently. The band’s latest, Welfare Jazz (due January 8th 2021, via YEAR0001), doesn’t bargain with the anxiety in that defeated feeling, but rather a boiling certainty that nothing and no one is absolute. There’s plenty of blame to go around, and things are just a lot more interesting when you admit that you’re not always going to be nice, you’re not always going to pick the right words in a fist-fight. So why not keep moving forward, swaying and strutting into the night.

Since their founding in 2015, Swedish post-punk band Viagra Boys have made a name for themselves burning up stages around the world. There’s a little Iggy Pop spit and seethe, a David Yow drunken stumble, and a bite of Nick Cave’s haunted bark. Add a dash of motorik groove, a pinch of post-punk grime, and a dose of no wave howl. For every gruff and gritty croak in the outfit’s catalog, they come back with a pair of bongos, squared-off synths, and a squonky saxophone.

Throughout Welfare Jazz, Murphy digs into the absurdity of the mundane and the mundanity of the absurd--like a kid sitting too close to the TV, taking the Saturday morning cartoons deadly serious and laughing at cable news, all while gobs of mashed frosted cereal threaten to spill out of his manically chewing maw.

In that reality, Murphy may not feel like a million bucks, but feeling like a hundred can be pretty damn good. Welfare Jazz comes with a special dose of hindsight in that regard. “We wrote these songs at a time when I had been in a long-term relationship, taking drugs every day, and being an asshole,” Murphy recalls. “I didn't really realize what an asshole I was until it was too late, and a lot of the record has to do with coming to terms with the fact that I'd set the wrong goals for myself."

Rather than dig through the particulars of his own pain in diaristic detail, Murphy renders that soul-searching in knowing false bravado and surrealist strings of droll detail. “Got a collection of vintage calculators/ If you don’t like it, babe I’ll see you later,” he spits on the appropriately titled “Ain’t Nice”. Over a cement-cracking bass line and pinprick synth, the track coyly mocks the patriarchal macho relationship drama of “classic” post-punk via full-throated snarl. On “Toad”, the American-born Murphy indulges in the country twang of his childhood to push old hounddog tropes, insisting he “don’t need no woman” a dozen different ways until all that’s left is to compare himself to an amphibian.

The record’s rejection of standard genre traditions gains radioactive strength via sessions with talented producers who boast a stunningly large range: Matt Sweeney, whose resume includes collaborating with Bonnie “Prince” Billy and producing Run the Jewels, led the way at sessions in New York’s venerable Electric Lady Studios. Justin and Jeremiah Raisen’s work with Kim Gordon and Sky Ferreira adds a fulminant shiver, and Pelle Gunnerfeldt and Daniel Fagerström have worked with every thrilling Swedish act from The Hives to The Knife. That range is on full display throughout the record. The scorched “Secret Canine Agent” is the spiritual successor to Devo’s “Secret Agent Man”, while their cover of John Prine’s “In Spite of Ourselves” rides the twangy country duet (sung here alongside Amyl and the Sniffers’ Amy Taylor) through an apocalyptic thunderstorm.

Viagra Boys’ satirical analysis doesn’t end with Murphy, as the songs deftly lay waste to society’s normalization of toxic masculinity, racism, misogyny, classism, and self-obsession. The nocturnal “Creatures” amps up the slither, imagining humanity as some sort of subaquatic monster. Later, the propulsive “Boys & Girls” sums up the primal drive in bassy repetitions of gender identity paired with cliched summations--that is, until that voice starts to replace “boys” and “girls” with words like “dogs” and Murphy relishing in gibberish.

But that stream of consciousness has a clear message. “I'm not good at talking about politics, but everything is political when it comes down to it,” Murphy explains. “I’d rather write a song about being defeated, which usually comes from a real place and says a lot.” Even the album’s title has a layer of satirical depth beyond its dada first blush; the transliteration from Swedish of the term used for the government’s financial support of jazz musicians cuts to the quick of institutionalized classism and prioritization.

The album’s 13 tracks sound primed for massive stages once the world ever pulls itself out of its pandemic tailspin--and judging from Welfare Jazz, it would seem Murphy will keep his heavily tattooed torso tumbling and swaying to the end even if it doesn’t. “Writing songs means I'm not stuck feeling those things anymore,” he explains. “You can’t just be fine with whatever the fuck happens. You've gotta think about the consequences of your actions and just keep going forward.”

All Them Witches (US)